I can recall winning a dance contest when I was 8 years old.  It was at a birthday party for a friend.  There were what seemed like 50 kids crammed into a small South Philadelphia row home.  We all had been sufficiently sugared up - candy buttons, small wax bottles filled with candy liquid, pixie stix and more.  There were games of all sorts being played and prizes awarded - jump ropes, hula hoops, that paddle and ball on a rubber band infuriating torture toy, etc.  But for the dance contest, there was a cash prize of $5.  For a kid in the late 70's, that represented 500 Red Hot Dollars (back when they were actually cinnamon and hot rather than raspberry like now) at Lou's Variety.

The music came on and my body began to show off some pretty dynamic moves.  Kids were all smiles as they watched in amazement (or maybe they were laughing at me, but I like my version better).  After it was over, I secured my $5 and received compliments from friends and the parents of the birthday girl.  Everyone knew at that moment that I could dance,  including me.

In our organizations, I believe that our outlets of creativity and expression have a place.  While I would not jump on my desk and bust a move (yeah, I just said that), I use those creative opportunities to prep me for engagement at work.  Energy levels are up when I dance or workout or have an opportunity to cook a great meal the night before or read a great book or swim in the ocean or...you get the idea.

Look to what you love and channel that in the work you do.  Focus on the energies and levels of health it gives you.  Our companies do well when we encourage staff to find and embrace talents and outlets.  Employees show increased engagement scores when companies encourage these outlets.  Organizations like Starbucks, Harrods and Pixar bake into their mission language commitment to creativity in their employees and fostering any opportunities to participate.  The investment of encouragement does not cost a company very much - some time in conversation and affirmation.

One of the truths from such creative pursuits is that it gives us a chance to do something in freedom.  The rules aren't seen as rules but rather parameters for us to be free.  Think of boxing, for example.  Gyms are offering forms of boxing as an exercise alternative.  To box, you have to have an opponent, a ring, some gloves and timed rounds.  Those rules are not burdensome but serve to surround so that the participants can focus their efforts on boxing with style and form, with paced breathing and movement and with concentration on his/her opponent.  The rules aren't seen the same way that the rule about not eating at your desk at work is seen.  We enjoy the freedom.

However, one point that presents difficulty for some is the identification of such interests.  For some folks, knowing what makes them energized is not so apparent.  They have hobbies, but sometimes those hobbies have become chores.  Scrapbooking is a great example.  When you start a hobby like this, the joys might be in the organization of the area to work, reviewing tons of photos and the memories recalled and the completion of the first book.  Nice.  By the 8th book, people start to think about "just getting it done" because it's taking too much time and the creative outlet it was supposed to be is now a mess on a desk.

Suggestion: take an assessment.  Just what you'd expect from an HR guy, right?  Well, right.  We believe in assessments for work improvements, right?  Please be nodding your head yes.  We use skill inventory surveys, compatibility exercises, personality testing and the like all to improve our culture, the fit among our people and to explore new veins of growth from within.  Why would it be a shock to encourage the same testing usage for passions?  If we want to develop people, it cannot be in a vacuum of work.  Who they are is who comes to work.  By providing some tools to help those who don't know what they love or how to use what they love to energize their lives, we are helping to impact the whole person, which includes the one who comes to work!

Do a little research on these tools.  There are many out there so be careful.  Look for data and responses from people who've used it.  Take some of them yourself.  Maybe you'll be reminded of passions that you've long since laid aside for some reason.  Dancing, singing, working out, painting, cooking, sewing, playing sports, fixing cars...find out what makes you alive.  And then, do it.  Shake that groove thing.

I still dance (much to the dismay of my kids).  I can wobble, dougie, slide, gangham style and some party rock anthem moves.  It's funny to watch me do the running man, pop and lock and bust out some Kid 'N Play moves from back in the day.  It's a great release and always makes me smile.  And so, at work, when someone walks over to me to complain about the choices in the vending machine (again!), I can keep a right perspective and a healthy mental outlook because of the outlets I have and am using.  I might be swinging my hips back and forth while he/she is talking to me, but hey, at least it's on beat.

The last team to make the 2022 MLB playoff roster was the Philadelphia Phillies. They were...

Something in the Way She Moves

Being affected is a gift.  It might not feel that way at the moment, but often we are changed... 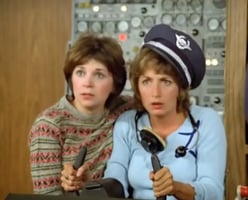